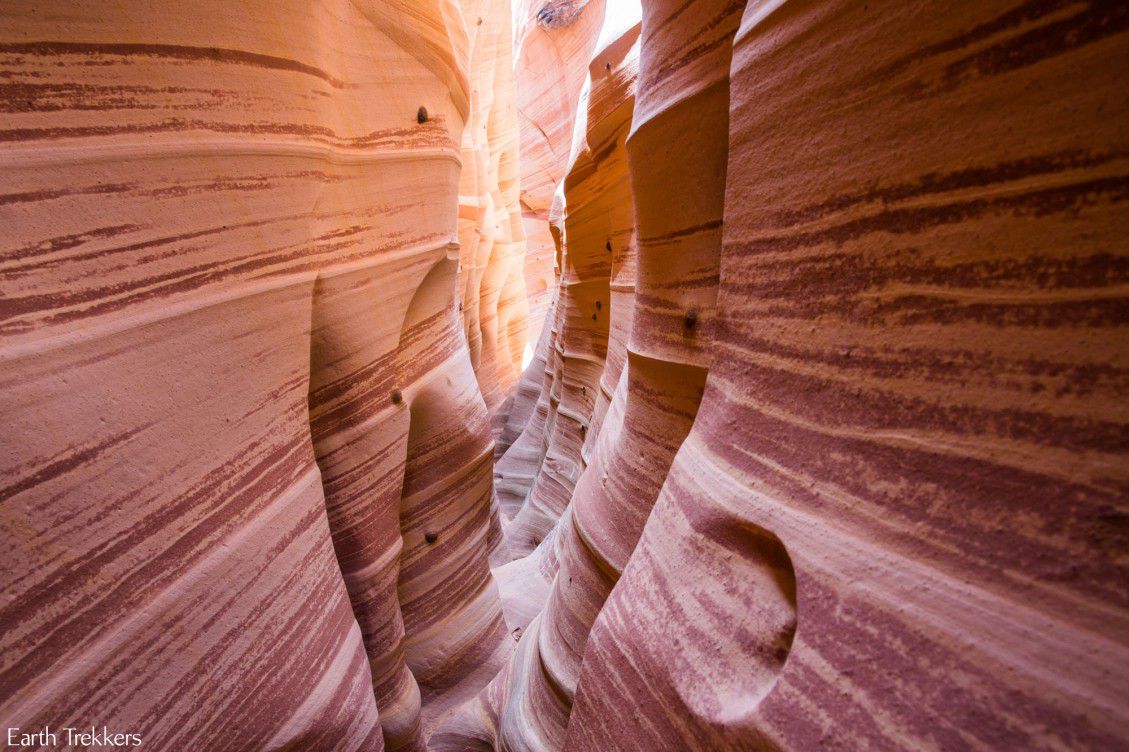 The party did not reach the Escalante drainage, but Thompson, who knew the history of the area, thought it would be a good way in which to honor one of the first known explorers of the Southwest. Ranching was one of the primary occupations of the new village and the cowboys soon began to push their way into the many canyons of the Escalante seeking good grass and lost cattle.

They were among the first non-Indians to see the arches, bridges, alcoves, and other wonders which draw visitors today. This proposed park included not only the canyons of the Escalante, but most of southeastern Utah. World War II intervened however and the proposal was all but forgotten in the crush of legislation related to fighting the war. Afterwards, some felt that national priorities had changed and Congress was, perhaps, more reluctant to restrict extractive activities such as mining on so large a chunk of land. Eventually, several national parks and monuments were created in this area, though even their combined size did not approach that of the original Escalante National Park - the park that almost was.

In , an aspiring artist and adventurer, 20 year-old Everett Ruess, arrived in Escalante to continue pursuing his vision of wandering wild areas, including the vast canyon country of the Colorado Plateau.

After spending time in Escalante getting to know local residents, he struck out with his burros in the direction of the Escalante canyons. He was never seen again and the mystery that resulted endures as one of the greatest known in the region. At first, his parents, accustomed to not hearing from Everett for long periods, waited for word from him. Some four months later, however, they began sending letters to various people in the region seeking assistance in finding their son. Over the next year, four different searches were conducted, one of which enlisted the assistance of an expert Navajo tracker.

During one of the searches, they found his burros, nearly starved but alive, in Davis Gulch. Also found was an inscription: "Nemo Several theories exist to explain Everett's disappearance. Some speculate that he continued his wanderings with a backpack and departed the region altogether. Some suggested that he might have climbed up crumbling cliffs to explore ancient ruins and fell to his death, the body covered by blowing sand.

Others suggest that he may been murdered by cattle rustlers.

It had been rumored at the time of Everett's disappearance that the government was sending an agent to the area to investigate a series of livestock thefts. It was speculated that Everett might have been mistaken as such an agent. The Navajo tracker, however, claimed that Everett had entered Davis Gulch, but had not come out; he stated there were no other tracks except Everett's.

The phone is not monitored when the building is closed. Explore This Park. Info Alerts Maps Calendar Reserve. Alerts In Effect Dismiss. Floating the Escalante River. This page summarizes some of the best day hikes I've found in the Escalante. Trailhead : Hurricane Wash trailhead, about 33 miles down the Hole-in-the-Rock road from its junction with Utah 12 just outside Escalante. Road conditions vary, but on the occasions I've driven it this wide unpaved road was in great condition all the way to the trailhead, and readily passable in a normal car.

Allow about an hour from Escalante to the trailhead. Watch out for cattle wandering onto the road! Jacob Hamblin arch and the giant alcoves in Coyote Gulch. Exploring Coyote Gulch is at the top of most hikers' wish-lists in the Escalante, and with good reason.

The sinuous sandstone canyon features spectacular rock arches, deeply undercut alcoves, and lush vegetation. It's a remarkable yet relatively easy to visit place that as is every bit as impressive as better known canyons in Zion National Park. For a day hike, the easiest access is via Hurricane Wash. A nondescript drainage at the parking area, the wash rapidly deepens into a pleasant open canyon as you hike down the normally dry streambed.

It's easy if somewhat sandy and unremarkable going for the first three miles. After passing the Glen Canyon Recreation Area boundary at the three mile point, there's a short section of modest narrows before the canyon deepens dramatically and water starts appearing along the floor. For the last couple of miles before the confluence with Coyote Gulch the canyon is quite lush, and it's easy to lose the main trail amongst the willows. All this is pleasant enough, but the drama of the hike begins once you reach Coyote Gulch proper at the 5. Heading downstream, the Gulch is marked by sweeping bends with huge undercut alcoves at almost every corner.

It's often easiest to hike in the ankle deep stream rather than follow the trail.


About one and a half miles down canyon - 7 miles from the trailhead - you reach Jacob Hamblin Arch, an impressive arch that cuts through the canyon wall where the stream makes a sharp U-bend. Just beyond the arch there's an amazing alcove, beneath which several backpackers had set up camp. We had lunch here and returned, but there are no obstacles to continuing a further 2 miles down the canyon as far as Coyote Natural Bridge. The Hurricane Wash route gives the easiest access to the Gulch, but there are other possibilities too.

It's also possible to make a loop from the Forty Mile Ridge trailhead by first heading to the lower Gulch, then hiking upstream and exiting the canyon near Jacob Hamblin Arch. We didn't try this since guidebooks differ on the difficulty of the exit route, with some suggesting that climbing experience is necessary to exit safely. The road is short but rough.

Trailhead parking is available just after the road crosses the Boulder Airstrip. Note that the trail now leaves directly from the parking area unlike in years past, when you had to hike down the closed road for a mile or so before joining the trail proper. Looking into Death Hollow from the Boulder Mail trail. A great out-and-back hike that traverses the heart of the Box-Death Hollow wilderness, the Mail Trail is one of the best slickrock routes in the Southwest. It follows the route of the old mail trail and still visible telegraph line for about 16 miles between the towns of Boulder and Escalante.

The trail - much of which is marked only by cairns as it crosses the slickrock - meanders across the upper reaches of the Sand Creek drainage for several miles before reaching the rim of Death Hollow. There are some sandy sections that slow progress, but the route is clear and the landscape dramatic. Death Hollow is a deep, imposing gorge, and the view from the top is outstanding. The trail descends sharply for about feet to reach the floor of the canyon, some 5. It's possible to explore Death Hollow in either direction, though the vegetation is fairly dense watch out for poison ivy and you'll need to ford the modest stream to do so.

More ambitious shuttle hikes are also possible, though I haven't tried them myself. With two vehicles, you could do a one-way hike all the way from Boulder over to Escalante. That would make for a long day hike, or you could camp near Death Hollow where there're good camp sites and abundant water. An altogether more ambitious hike, bordering perhaps on a canyoneering trip, continues down Death Hollow to its confluence with the Escalante river, then heads downstream to the Utah 12 bridge which is 10 miles all uphill by road from the Boulder Airstrip trailhead.

This 20 mile hike, which involves a lot of wading and swimming in the middle part of Death Hollow, is described in Day's guidebook Utah's Favorite Hiking Trails. I'd avoid any of these hikes in mid-summer or when storms threaten, there's no shade and neither the canyon nor the exposed slickrock would be good places to be in a storm. Trailhead : Egypt trailhead, at the end of the Egypt road which leaves off the left of the Hole-in-the-Rock road 17 miles from the Utah 12 pavement just outside Escalante.

The Hole-in-the-Rock road is dirt but usually easily passable, while the 10 miles of the Egypt road present more of a challenge: there's a short rocky stretch and several places where sand and dried mud might cause grief after any rain. Escalante's "Golden Cathedral" in Neon Canyon. The Golden Cathedral is a magnet for photographers and adventurers alike, and if you're familiar with the Southwest you'll surely have seen pictures of it, often with beams of sunlight or canyoneers descending from the holes in the roof more remarkable is this footage of water pouring through the roof!

The Cathedral lies at the dead-end head of Neon Canyon as it's informally called, on maps it's unmarked , a small but beautiful tributary canyon off the Escalante. Assuming that your vehicle can reach the trailhead it's a moderately difficult 4. Orientation : The trickiest part of the hike to the Golden Cathedral is finding your way down to the Escalante. Before leaving the Egypt trailhead it's worth taking a moment with a map to orient yourself, since from this lofty vantage two levels above the river the easiest route down can clearly be seen. You want to keep to the left of the south fork of Fence Canyon, which can plainly be seen leading off toward the Escalante.

Visible, but less prominent, is the north fork of Fence, which joins the south fork shortly before it reaches the river. The simplest route down descends from the bench almost exactly at the tip of the inverted "V" where the two branches of Fence come together. If you do lose the trail, track toward the rim of the south fork of Fence near the tip and you'll easily find it again.

From the trailhead, a steep cairned route leads down the slickrock slope to the bench above Fence canyon. Near the signed boundary of the Glen Canyon recreation area the trail divides, somewhat indistinctly, with both branches taking different routes down to the Escalante in the vicinity of the mouth of Neon Canyon. 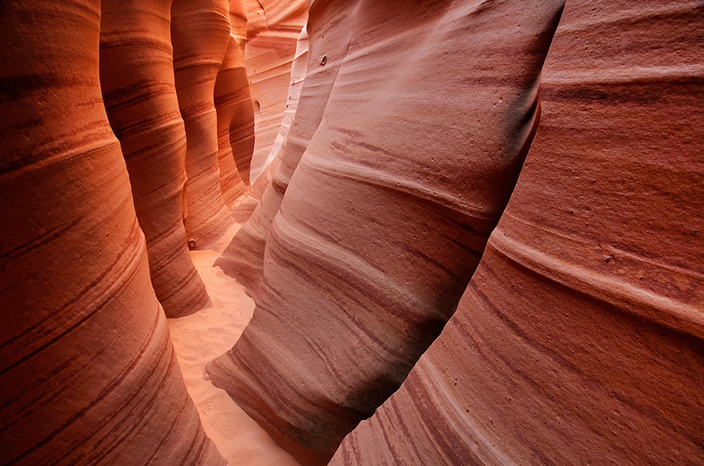 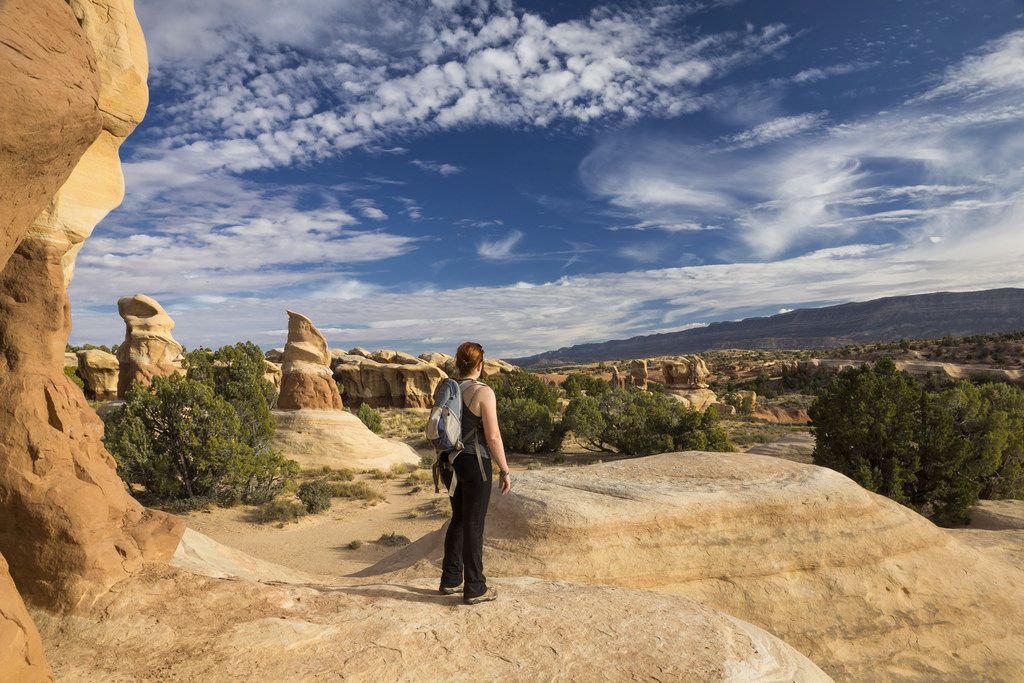